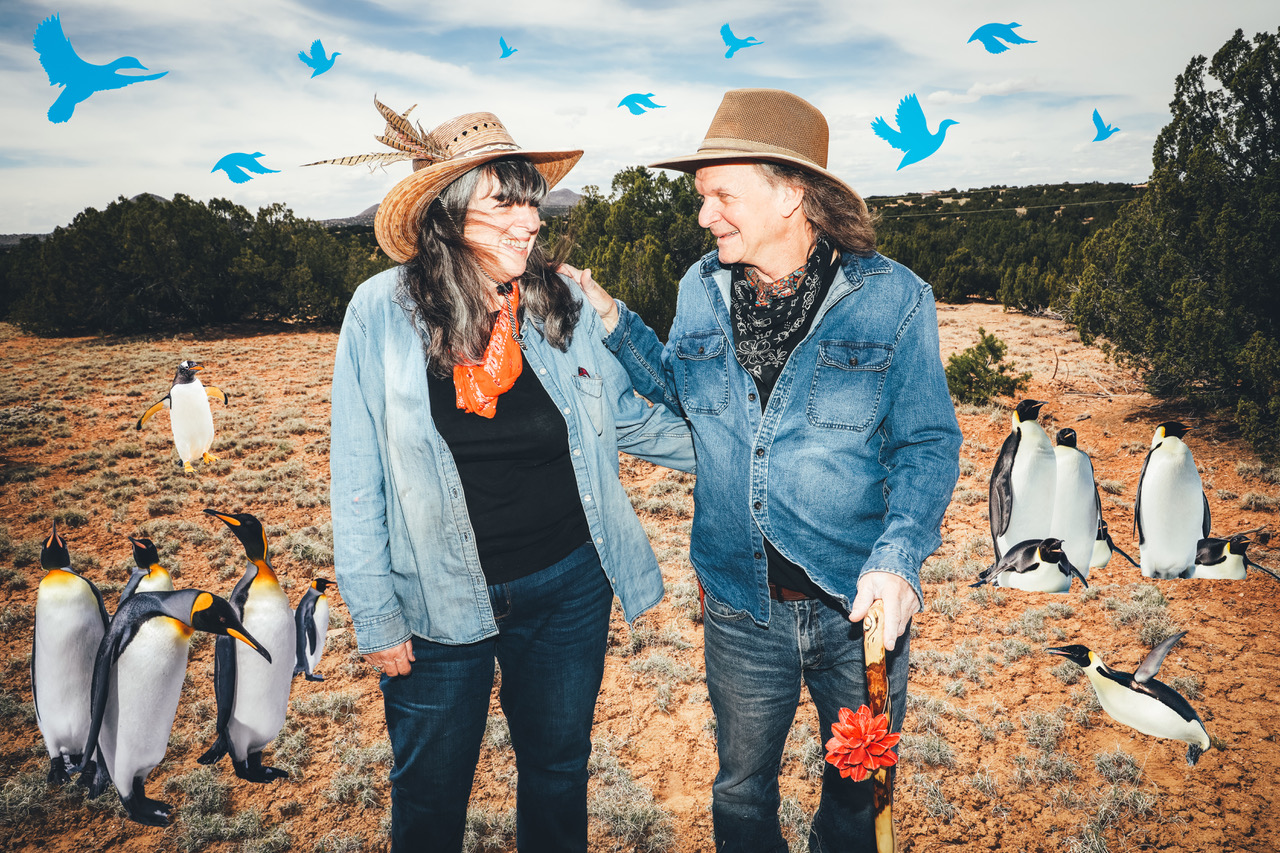 What are your names and DJ names?

What is the name of your show, and when is it on?

LR: Well first of all, Denise, I have never decided in my head if it’s The Tower of Song, or Tower of Song. I still don’t know. Describe our show? You know, remarkably, it’s stayed the course of what I originally wrote about it, and what I originally wrote about it is that it’s going to be an eclectic musical review that skipped around in different genres, mostly pop, folk, rock, jazz, and blues. And the impetus behind having that varied playlist is simply because I’ve always been an advocate, in everything I do, for diversity. I’m obsessed with inclusivity.

AT: Back in New York, we listened to KMRD because we knew one of the DJs. We love music. We grew up in New York at a time with the leading FM station with great DJs that gave us a lot of information. Two of the DJs on the station happened to be our high school English teachers, they jumped from teaching high school to being DJs. We also grew up at a time where – if you were ten years old or older in 1963, you wanted to learn to play the guitar because the Beatles came out. So that’s what we did as teenagers: we played music on the radio, FM came out, concerts were aplenty. We’re both musicians, we love music, we grew up with great music at a great time with great DJs on the radio.

LR: There’s a Lou Reed line: “My life was changed by rock and roll.” Mine wasn’t. But my life was changed by pop music on an AM radio. I remember the month – it was January 1965 – when I started listening to AM radio, and that’s the dividing line between everything that came before in my life and everything that’s happened since. When I wasn’t in my bedroom with my radio on, it was strapped to the handlebars of my bicycle. It accompanied me everywhere I went.

Before we moved to Madrid – sure, we listened to Caiti because that’s our daughter – but I immediately fell in love with Scott’s show (Skinny Al’s Blender) and Captain Schmetterling, and Hillbilly Phil, and of course, Ken Wolverton’s show. And I was now living in Manhattan, scheduling everything I did around those shows, around making sure I was home to hear them. And that was part of our process of even deciding to move here: I had to be near them, and I had to meet them.

LR: The appeal for me is to do something that I just always thought was impossible. If we stayed in New York, there would have been no way for me to start doing radio. When I learned about [KMRD] and what you were doing with Caiti and your friends here, I lost my shit. I can’t tell you enough what that meant to me – what it still does. That initial shock hasn’t gone away. I don’t care if there’s one person listening. If there’s nobody listening, I care very much. But if there’s at least one person listening, that’s all I need to feel like this is the biggest thrill in the world. That my voice is going over something, going into somebody’s room. The other perks were that, what a great way to become part of a new town and community, to be literally out there on an airwave, wow.

AT: I don’t have too much to add, that’s pretty good. That about says it. The best part is being part of a group, part of a community, and doing something musical.

LR: I have to add something! The other thing is really hokey, but really true. I’ve been making – what we called them in the 70s was mixtapes – for myself, and I had nobody to play them for. I did this into my adult life, obsessed with making music compilations that went on a journey. When Denise came into my life, she introduced something new to me. I’d never been on the road, I’d never left the five boroughs of New York. We took road trips, and for the first time in my life I had somebody to share my homemade CDs with. When we were gonna move to Madrid, I was thinking, well, we’re going to travel less because we’re moving to a place that we want to stay at most of the time. Now what am I going to do? Who am I going to make my tapes for? The radio seemed like, holy fuck, what a logical thing to do. It’s what I should have been probably doing since I was ten years old.

AT: We’re retired, we’ve moved here, we’ve completely changed our lives around, and this just adds to it. This is such a big thrill, a plus, a pleasure.

LR: I’m a painter and a teacher. I worked in really corrupt schools with misguided unenlightened administrators, and the times dictated that the art of teaching die. And I wasn’t able to do any more the kind of creative teaching I used to do. I don’t miss teaching. But what I do miss is the creative outlet, and being on the radio is so funny – now that I’m not in a classroom… if somebody said to me, “How do you conduct your classroom?” and I’d say, “Oh, I conduct it like talk show radio. Now I’m in a situation where I’m doing a radio program and if somebody said to me “How do you conduct it?” – I conduct it like a teacher.

AT: Music has always been so much a part of my life, so to be able to play it here… it keeps us in contact with some of our friends back East who are listening, we get phone calls from who knows where, and it’s very funny here, we’ll be talking and people hear our New York accents and go: oh, you’re Lightnin’ Rod and Aunt Tenna! It makes you feel like a superstar or something. It’s just great. It’s work we do together. It’s a big deal, I really enjoy it. I’ve become a ham in the last four years!

LR: It’s a big deal! I was in a band, and Denise wanted to be in it, and every time she’d show up, everybody would look at me and say, “Dennis, she doesn’t project her voice.” It was very hard to get you to overcome that shyness, to just turn up the volume.

AT: And then being in Theater of Death, and being here it’s like: where’s my spotlight, where’s my microphone?

LR: Now she’s the biggest ham in the world!

I gotta throw this in because I’ve always believed this: I think dead people hear your voice even quicker when it’s on the radio than when you’re thinking something in your room. I get to talk to dead people! I got to talk to John Prine two weeks ago and tell him how much I love him. I got to tell my dad repeatedly this last year a bunch of personal stuff. That’s a real part of the mix for me.

AT: What are your hopes, Dennis? Hope that we get here again next week to do it!

LR: Well, that really is the biggest hope, that we have the health and the means and the patience of the people around us – that we can continue doing the show. Why do I personally want to do the show? It’s the same reason why I made the tapes when I was ten, why I made the roadtrip tapes, why I first wanted to try going on the air – those first twelve nervous shows that we did – it’s always the same reason. I want to hear what it sounds like; the gestalt. I record it because I want to play it back and hear everything wrong with it. It’s the same reason why I paint on canvas. I need to program a whole bunch of shit into it, then get spontaneous, then look at it and say, “Where did I go wrong? I can’t wait to do the next one.” It’s such a fucking labor of love.

AT: Everything that people want to happen for the station will happen, with the support of everybody. I’m amazed there’s sixty different shows on the radio – how many people are devoted to their shows, and bringing the toilet paper, cleaning the bathroom, spraying down everything so it’s all nice and antiseptic for everybody – just sharing things. I hope it continues and I don’t know that much how a radio station grows – this is all I know – so whatever it can blossom into, I hope it does.

LR: I look at this kind of the way Ken Wolverton does – that was my attraction to him when I heard him talking on the air so often – he takes this so seriously. And he takes it as part of a much larger organism, as a vital part of an organism, as an ongoing organism. It’s a continuation of what Homer did when he began orally telling stories – I feel like this is a continuation of that. Sometimes you’ll see a government that will bring out the army tanks to flatten an art exhibition because the canvases are portraying Expressionist painting. The biggest threat to that is indivudality and expressionism. I see this – I see FM LP radio – as a part of that precious resistance to that ever-present threat of a fascist or communist regime suppressing individual expressionism. I find it to be just absolutely of  breathtaking importance, in that regard.