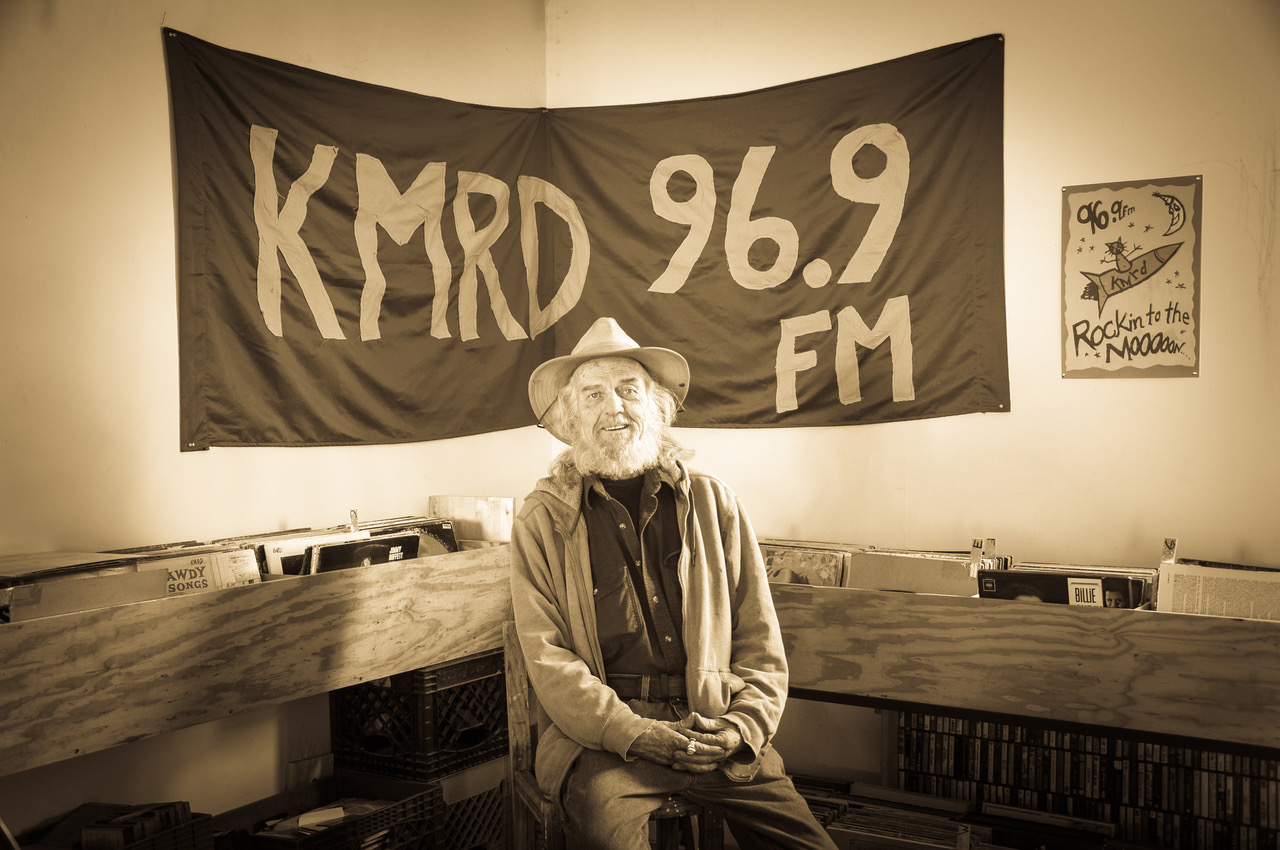 My DJ name and my name in Madrid is Arroyo Dan. I’m thinking about “Zoltan” once it gets warm.

The name of my show is the Fifth Circuit. What the Fifth Circuit means – it has nothing to do with the judicial court in New Mexico, nothing. The Fifth Circuit is the first post-terrestrial circuit in the human nervous system. This has been activated in 1960, and no matter what the governments say, you cannot deactivate the brain. [Saturdays 1-3pm.]

This show is primary for old hippies, and I mean the real deal. I’m talking like ‘67, ’68, ‘69, ‘70, right? And that’s not to say that there isn’t any more, but that’s what the focus is on. The focus is basically on the mystery of life. The wonder of being, of being aware of being aware, and all that goes with that. I’m also into the whole origins of the human species on this planet. And that’s basically what’s going down.

Here’s the deal: first off, I think this a fantastic thing that we have going on here in Madrid. My two cents is that I get a chance express my soul, and my heart, and I don’t have a whole lot of time, and neither does anyone else. I’m sort of standing on the runway waiting for takeoff.

What is the appeal of doing a radio show?

The feedback I get from my friends – not just my friends, but every demographic in Madrid, somebody has come up to me and said, “Dude, way cool, don’t stop, keep going, we need to hear this.” I can’t tell you how many times people have come up to me after the show – people I don’t know – and had said that, and so I’m trying to bring that to y’all.

Oh man – what difference has it made for me? Well, I’m sort of in a hard space in my life right now, and I’m not going to into the drama of it, but the dharma of it is that it allows me to be me. And to talk to the tribe. And I get phone calls – people are responding to this. And so I’m going to keep cranking as long as I can.

What the show has done for me, it’s raised my head and it’s raised my heart. Now where do you go to get that? It’s changed my life insofar as I get a positive recognition for my movie, for who I am, for what I’m about. And it’s all about expressing ourselves while we’re still here. This is the only real art form that I have, and so I’m trying to make the best out of it and it’s done nothing but raise me up. Thank y’all.

My hopes for my show is that I can get my act better together and tighter together. My computer tripping is like dinosaur.

I hope that people realize how cool this is, and how much of a drag it would be not to have all of these incredibly eclectic shows that we have going on here. I just think it’s totally cool, I mean people are digging on it, they’re driving listening to it, they’re tuning in, they’re telling their friends, and you hear stuff that you don’t hear anywhere else in this part of the universe.

Arroyo Dan passed away on September 13, 2020. On September 26th, which would have been his birthday, we presented a show in his honor during his Saturday time slot. The recording of the show is below: the first hour includes excerpts from an interview conducted with Dan by Andrew Wice, and the second hour includes voicemail messages from some of Dan’s friends, neighbors, and loved ones. Both hours are full of music that Dan loved, as heard on his show every week.