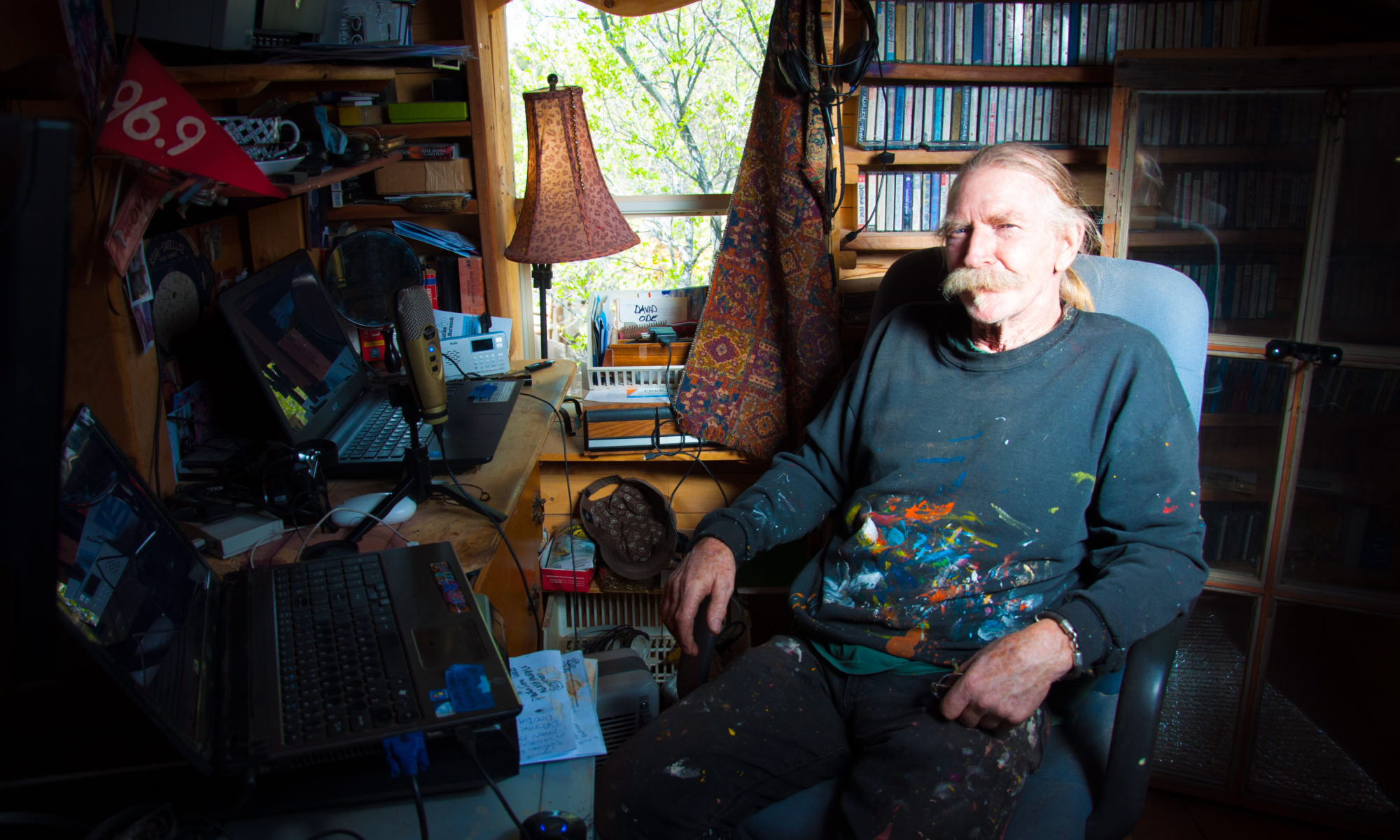 What is your name, and what’s your DJ name?

Ken Wolverton, and I go by Techno Sadhu, pronounced Shadoo.

What’s the name of your show? What’s its format?

The Techno Sadhu Quartet. It’s a talk show divided into four half-hour sections: news according to me, which is not news at all but things people either write and I read, or recordings I play; the second 30 minutes is philosophy and psychology talks—Alan Watts has been my mainstay for the past 2 years, because he’s a most eloquent philosopher, a 20th-century equivalent of Sartre or Aristotle. The third quartet is all of my writings since I was 13 years old; I’ve read two dozen or more over the years, from my trilogy; and the last 30 minutes is left for a live interview series I started of the women of Madrid. We’re really a matriarchy, here in Madrid. 90 percent of our shops and restaurants are owned and operated by women.

In high school, a buddy and I created a radio station, a fictitious one, which we recorded in his bedroom, and it was fun, we did man in the street interviews—this was in 1959, 1960. A few years later, I had a job as a baggage boy in the Trailways bus station, the midnight shift, and all the way back home afterwards I could clearly hear these stations from San Francisco—it was great! My first experience with a real radio station was in Scotland, 1975 or ’76, the first community radio station in Britain. I wrote a radio play for the Children’s Radio Workshop and got to record it in a real studio. It wasn’t till I moved to Cerrillos in 1988 that I started listening to KUNM [the UNM public station]—I would listen every Sunday to Joe Frank’s show; he was a legend in the world of radio theater and he’d read short stories, all tagged together, and I couldn’t wait till next Sunday. He inspired me. You’d listen and you saw it all in your head.

Over the years, many people talked about starting up a station here in Madrid, but it wasn’t till  our blessed Stella arrived that anything happened. I really wanted to emulate Joe Frank—I wanted to take my writing somewhere—it was never about the money. I didn’t want to be a music DJ, although music is integral to my show’s format.

What’s the appeal of having a radio show? How does it fit into the rest of your life?

Well, first, for me, radio was a real thing in my life. It was old-time radio where you listened to programs and they took you into your own imagination—every human’s imagination painted the picture. Then, in the late ‘60s, the FCC turned it all over to the corporate heads who made it all into homogenized glop, where you had to have a playlist and you had to stick to it. Underground and pirate radio stations cropped up all over the place for a while, but they didn’t last.

Secondly, I realized I’ve had so many occupations—poet, traveler, philosopher, artist—but I never went on with it. Plus all my life I’ve written. When I finally got to do my radio show, I pulled all my cameos, my vignettes, my schizophrenic side into an art form—through radio! That’s what I saw Joe Frank doing but it was the first time I experienced it myself. The theater of radio, the fun part—was different from being a DJ or a commentator or a newscaster. It gradually awakened for me, I was just learning how to drive the machine, like learning to drive a stick shift—God, it’s complicated in [the studio], and you’re on live! For me, it’s my own personal reward, to get to do all my separate skills in one place, and it’s so gratifying, having people connect with me through Mix Cloud, all over the world.

Here at KMRD, we’re the voice of the people, we have a legendary voice that can be heard all over the world: Real people talking! We’re providing an example for other low-power stations. We’ve got over 60 people now, all doing different kinds of shows weekly. I feel good about calling other DJs on the air to just say, That’s great!—and I encourage everyone to call in when you like something you hear!

I feel grateful to put my writing somewhere; the website is just vanity, but on the radio I know there’s an audience, so as a presenter of theatrical programs, it’s very gratifying for me.

What are your hopes: for your show? for the station?

First, I want to talk about my hopes for the station, with or without me, because KMRD is really valuable, to set an example of what radio can be for America. I hope that we can inspire other small communities to start their own low-power stations. Younger generations never really knew radio, its concepts of theater, with shows like The Shadow and The Inner Sanctum—weird, spooky things!

I also want to mention: The facility we’re in now [our station], it’s impressive, and we’re giving a lot of rent for this space every month. We’re a small community! What I hope is that we can make it pay for itself, as a recording facility, a community meeting space, and many listeners need to be donating to us so we can continue as a community enterprise.

For my own show, I think there’ll be a time when I’ve done all that I wanted to do, but I’m not there yet. I guess when I run out of the women to interview in this town, but each one has a story. I’m getting to meet them on an equal basis. They’re all so beautiful and articulate. Women can go all over the place, and I’m enthralled.

Reading my own writing, I’ve got 30 more weeks to go; it doesn’t necessarily follow a storyline, it’s more about the way we think and also our human experience, because each one of us has this little child inside, asking Why me?, What’s the universe for?, What’s that and why am I feeling this way? We’re all really vulnerable and emotional, the interior world.

My biggest daydream is to get to travel and meet people, tell a weekly story. Carry on being the lunatic I already am, and having airplay wherever I go. Meet people through radio and you both reveal things that are lovely and sweet, that kindred feeling. I had no idea radio was going to take me to that!