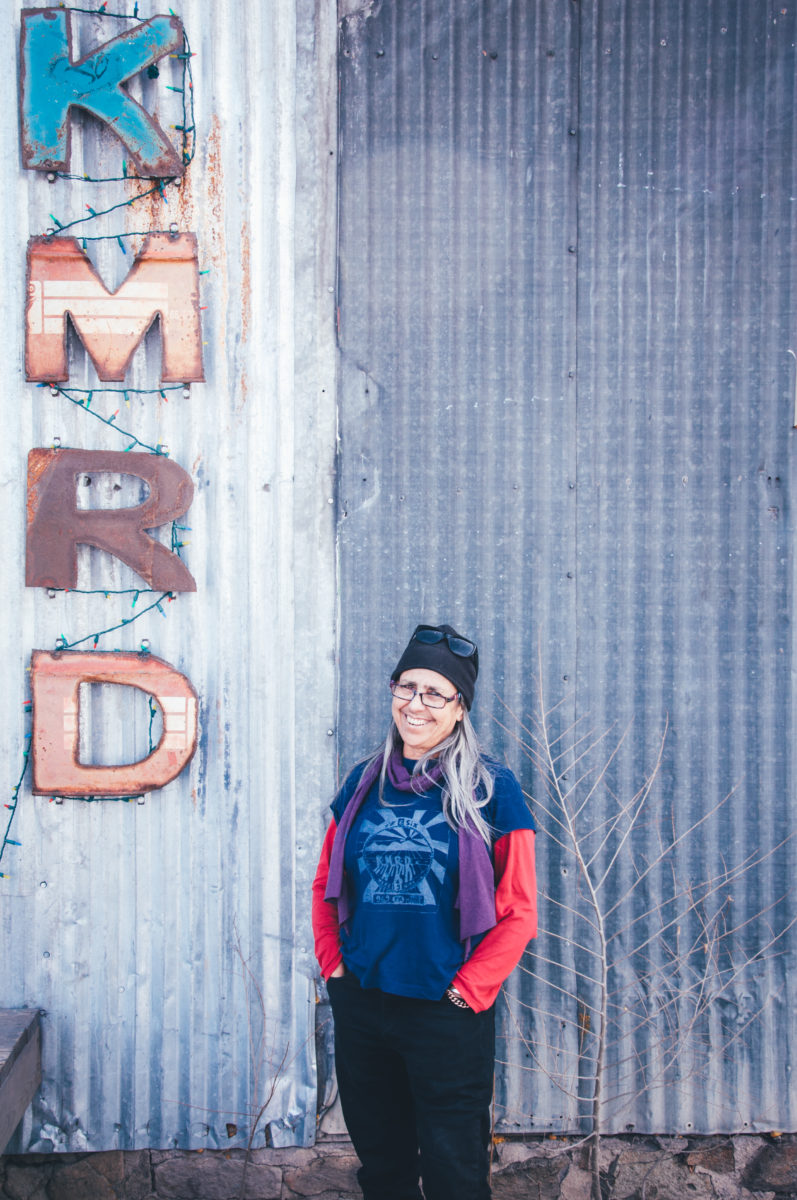 My name is Gwendolyn Zaxus. My DJ name is SUAP (pronounced Soo-app), which stands for Shut Up And Play, because I’m a talk jock [on my own show], but when I’m subbing for other people’s shows, I’m DJ-ing.

It’s a talk show and, in a nutshell, I help people, including myself, find the cult in culture, through stories, articles, personal experiences and live interviews.

It’s a community project, first and foremost. And then I realized it was an outlet for keeping sane. What I realized was there’s tons of mainstream radio stations out there and I wanted to counter-balance that information. LPs (low-power stations) are where it’s at, in my book. We can say things that mainstream stations can’t, so education can happen, emotional information primarily, as well as scientific information, like understanding the brain. We understand ourselves that way.

After working for the Post Office and the Madrid Volunteer Fire Department, I needed something different that was also community-oriented, and this was it.

What’s the appeal of doing a radio show? How does it fit into the rest of your life (job, creative passion, family)?

It was something new I’d never done before, and of course I gravitate toward new, the un-experienced! And—again—it was a community project. That was huge for me, because of how I see our roles as individuals in our human time on Earth. The more we can experience, learn, and can actually incorporate in our lives, the better understanding of ourselves we’ll have, and then of others, too. It’s an opportunity for growth, and I jump at that, even when it’s scary and uncomfortable. And, for me, if there’s anything I try to do on my show, it’s talking experientially, so others can, too. Vulnerability is so uncomfortable for so many of us in this culture. I came into my show raw—in the past three and a half years, I have grown tremendously as a result of my own show.

What difference has KMRD made in your life?

Mad Talk has sparked great conversations with people, and out of those conversations I’ve grown because I’m willing to think and change how I think. I’m not right! Nobody’s right, and nobody’s wrong, it’s all experiential. And subbing for someone else’s show—it’s my favorite thing to do, aside from my show. I can just play music; it’s spontaneous, it’s freeform, I don’t record it and it feeds my soul.

What are your hopes for your own show/and for the station?

For our station, I hope for a long, healthy life so we can take KMRD to the point where we don’t have to think about income. That means more to me than my personal show.

Provided the station continues forward, I can only hope that my show changes over time and that I can continue to give people something that means something to them. For example, a couple of weeks ago, I did a show discussing the issue of thinking about having a child, what’s right for each individual, and I got a lot of feedback. The most important feedback from that, in my book, was from the teenager who called in and said how much they enjoyed it. If I’ve reached one person, I’ve done my job.