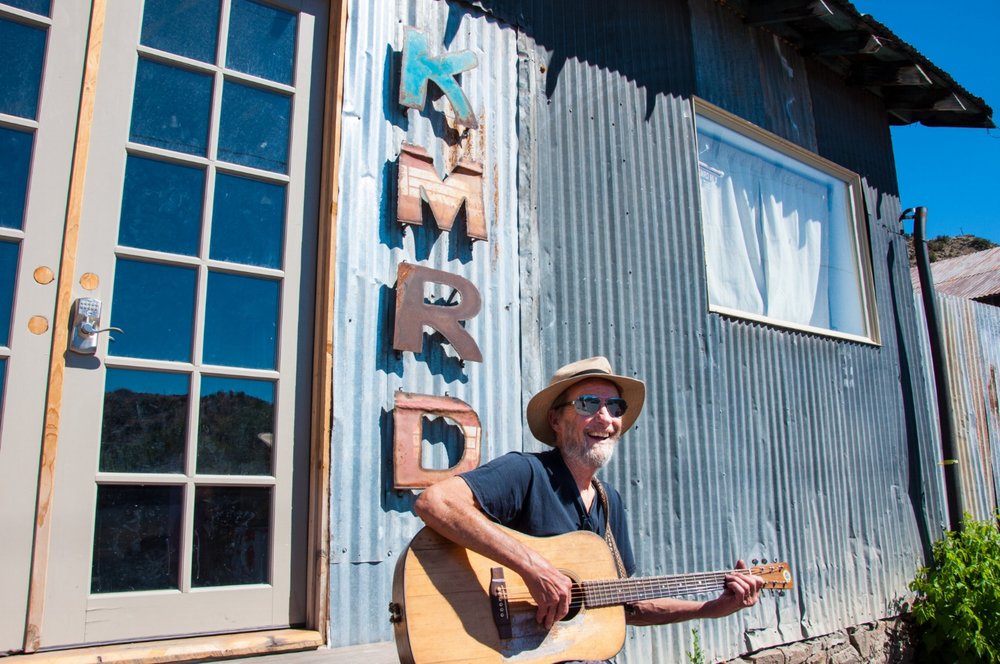 My name is Dennis Overman, aka Obie, aka the Wondering Minstrel.

What is your show called? When is it? What is the format of your show?

The Wondering Minstrel – with an O – wondering. I’ve experienced a rebirth of wonder. It’s Tuesdays from 2 to 3. I’d like to think of it as a showcase, where songwriters can come in to play their original stuff, if they’ve got it. I started off thinking there were so many songwriters hanging out and I know a lot of them, but they’re not pros, they don’t even play gigs, they’re local, homegrown people, and that’s who I originally thought would come knocking down the doors to get in here. I have lean times and all of a sudden it will pick up. I noticed in the summer it picks up, because people are traveling around. But basically it’s a showcase for songwriters: it’s sort of like an open mic.

It’s an old dream, it really is. I had this same idea (I didn’t have the theme song written then) and I went to KUNM with a proposal. I think I had a bunch of stuff on tape. I remember this one day I went down there – as I was leaving I put all the tapes on the roof of my car, got in my car, and drove off! I don’t know what happened to all of those tapes.

I’ve wanted to do radio forever. I love it because it’s in your head, it’s hands-free, you can be driving, you can be cooking, cleaning the house, whatever you’re doing. I just love it. I think it’s the best for getting in people’s heads, and playing music that people respond to. And I really like what’s coming out of Madrid – it’s an amazing variety of totally eclectic wonderful stuff. You have these bright moments, that are just worth it, you know. Me and my kids always sang together, I’d love to get them all on here. I’m dangling the hook: “Hey this is really fun, right?”

What are your hopes for the station? For your show?

For the station – to carry on. I think it’s really important, it’s really good work. And for my show, I just hope I can keep it up! You have a bunch of geezers here and you know, it’s kind of week to week. Not really! But you know, we’re all trying to be good and hang on and take care of ourselves because all of sudden life just got really a whole lot better, thanks to KMRD. I’m telling you this from my heart. I really sincerely love this station, and I hope to see it carry on, ad infinitum. I have a three and a half-year-old grandson now, and he rocks! I’m hoping that my kids have a place to come and be DJs, if they want.

How does doing your show relate to your life as a musician?

Well, I wrote a theme song. It still cracks me up – I can’t sing that line, “You might be hearing me, I don’t really know,” because that is like the ultimate conundrum for a DJ. It’s like, “Ok, I’m putting all this stuff out here” and you don’t know if anybody’s hearing it! So it’s always really wonderful when I get feedback from people, that just keeps me going. It’s my Sunday. Tuesday from 2-3 is my sacred hour, it’s kind of spiritual for me.

We lived out in the boonies, we didn’t have electricity, so it was like roll your own music, you gotta be your own entertainment, so that’s what we did. It was all backroad, subculturey. It was neat. I started playing in coffeehouses in Santa Fe and open mics. My friend David and his wife at the time, Eliza Gilkyson, had a little coffeehouse and were so warm and supportive, and I’d go down there and try out a new song… and then right away I got jumped into the Family Lotus, that was the first band I ever played with, and that was like psychedelic. And that’s when it really got me. I got hooked, but with a live audience, feedback right then. You could smell it in the room, you could feel the vibration so I really got hooked into this, because it’s beautiful. It comes and it goes, it’s in the ether.

All of this is just a blessing to me – I wish there was a better word, because that has religious connotations. It’s like dues or karma. I started putting out music when I was 21 and I’m 74, so that’s a long time! And I never lost that hope that something would connect with somebody. You get the bug, and you’re hooked on music.