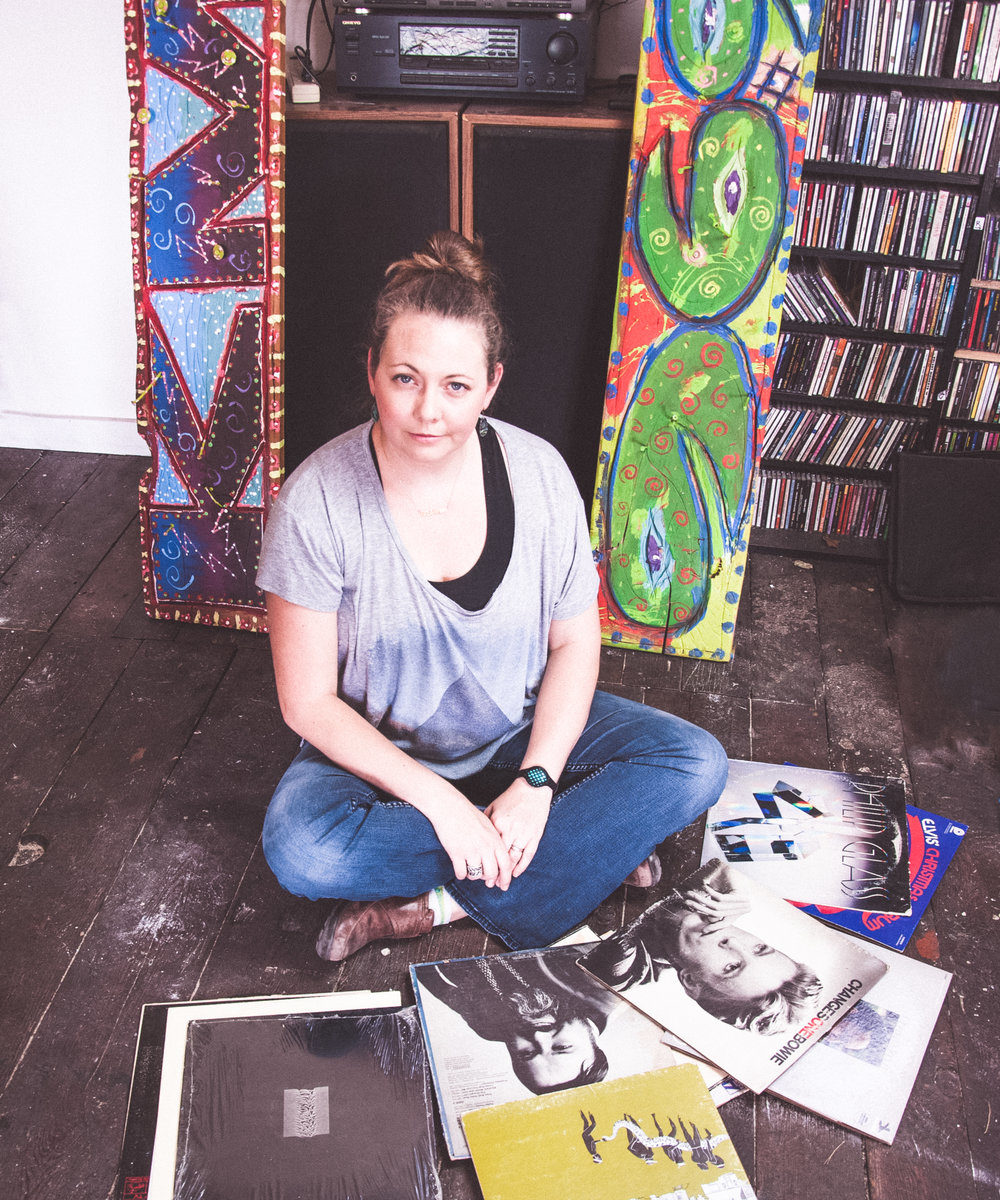 The show is called Midnight Ideas, and it’s on Sundays 3-5pm.

Describe your show/What is your show’s format?

The name was inspired by a sign that I saw outside a bar – I didn’t know it was a bar – in a town in Oklahoma that shall go unnamed. I was visiting my sister and we were chatting in a parking lot and I looked across the street and I saw this one-story, small, blockish building with no windows, sort of, in a field – if you can picture it – surrounded by trees. And there was one of those signs that is also an arrow pointing to the building from the side of the road, with the magnetic letters stuck to it, and some of the letters had fallen off and I thought it said “MIDNIGHT IDEAS.” It just said “Midnight Ideas” with an arrow pointing at this nondescript building and it just got my brain reeling. I was like, “What happens here? I need to know! What is this place?” Then my sister told me, “No, it’s Midnight Riders, it’s a bar.” It’s like a biker bar (laughs). Oh. The fantasy sort of fizzled. But that feeling, it really got me. And I started thinking about, as a writer, a lot of the things that I feel compelled to express find a way to be said in the middle of the night, just as I’m getting tired, and letting go of the days events, and slipping into the dreamy ether. That’s when walls go down and windows open between worlds and things get flooded – so I really try to focus on songs that I think deal with subjects that probably kept the person that wrote them up at night until they were out there. Sometimes it’s real broody, sometimes it’s kind of sexy, it’s kind of all over the place. So there’s not much of a theme there, other than what keeps you up at night.

What immediately drew me in was Matt, my husband, building the sound board, but I was so busy and stressed at the time that I didn’t see it very far beyond just being one of the many things I knew he was busy working on while I was also distracted working daily and trying to make my business work. I didn’t see myself as being very involved beyond that scope until he asked me if I was going to do a show. Once broadcasting started, it quickly became a special way for me to escape the stressful day-to-day… a way for me to give time to something that was whatever I wanted it to be, instead of giving time to all the stressful crap that I thought I needed to be doing.

I go through periods in my life of being really inside myself – opening and closing, like some flowers do at night. With radio, I think it’s an ideal outlet creatively for me, because for some creative exercises, you don’t have an option of being open or closed, it’s one or the other. But with radio I can control that from week to week.

As a writer, I have written things that are meant to be consumed, but it’s not why I write, it’s more out of a compulsion to express things I have going on. Most of what I write isn’t for anyone else but me, and radio’s kind of like that too, but I can choose how much of it is for other people.

What is the significance of KMRD for you? What are your hopes for the station?

More and more, especially with the current economic and political climate, I think it’s pretty obvious that things are shifting from people wanting things to people wanting experiences, and I love KMRD because it’s such a unique experience. You turn on the radio any time throughout the week and unless you’re looking at the schedule, you have no idea what you’re going to hear. Imagine you were just staying here for a week, and it’s your first time here, and that radio was just on in the room you were staying in – every time you walked into the room, it would be something different happening on the radio. There’s a freedom to it that we definitely don’t hear on commercial radio, and I think it’s a good ambassador to the outside world for Madrid.

My hopes for the station are that it’s received by an interested audience beyond our community, but that it also continues to be an outlet for everyone in the community who wishes to express themselves on the radio. It’s a really important thing that’s happened here, and I want it to keep going – because I enjoy doing it, but I think it’s important for other people. People come here and they look around and see people looking each other in the eyes and having genuine conversations. For the wider global community, it’s important to realize that authenticity and individuality is ok, and indeed encouraged in some places still.