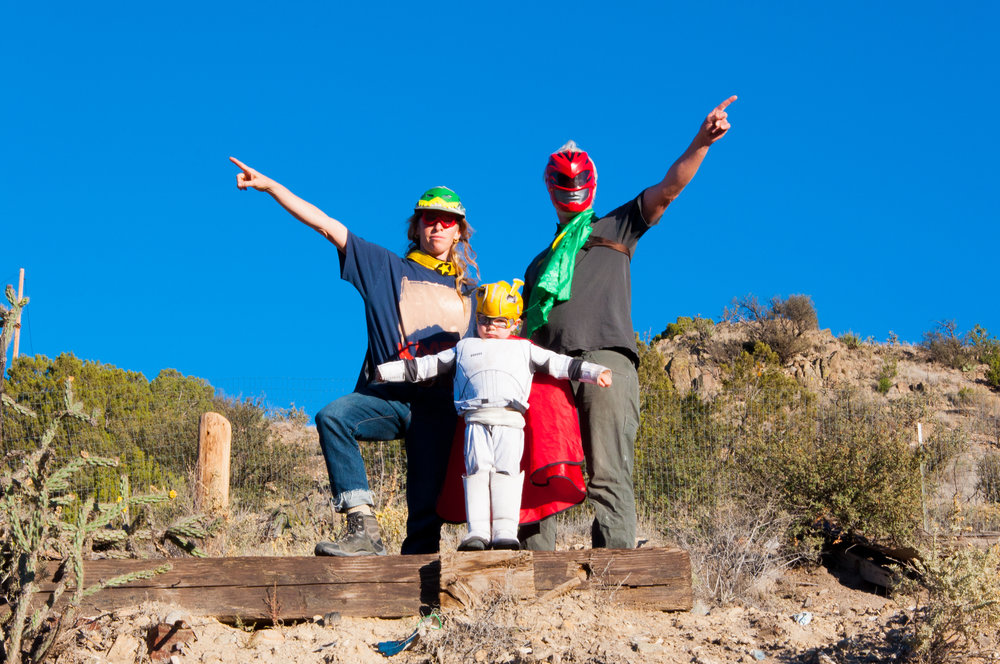 We are Mama Leesasee DJ Featherdust, Papa Spencer DJ Midden and Baby Solucien, who has been raised in the station and isn’t quite a baby anymore if you listen to him on Saturdays.

We are the 5-7 Nightjar, Saturday evenings.

We concentrate on new releases, like within a year with some relic tunes cut by wacky sound bytes paying some relevance to current events and vintage nostalgia. We showcase much of Solucien’s musings. It’s pretty freeform but layering is important. We like filler. It’s impossible not to pay attention to the headlines and throw it in the mix. That began in 2010 with the Deepwater Horizon oil spill. We broadcast a show [on KSFR during the Twisted Groove with DJ Spinifex] that had everything to do with that horror and tendering it with a soundtrack. This composition method sort of stuck.

We have always been drawn to radio. I never had money for a decent stereo. Growing up my family had several crappy clock radios to choose from if you wanted music. In the 80’s I remember distinctly having this feeling like “I’m too young to know but right now it just feels like everything sucks” and the radio really amplified this. I got so fed up with what I was hearing from my sad device that I’m just going to throw it somewhere and it’s in my hands and then I discover the frequency button. It’s on AM. I switch it to FM. All of a sudden crisp clear music comes streaming through the speaker. I am now tuned in and thinking, “It’s going to be OK!” I have grown to appreciate AM radio but after a few years of that corporate repetition I tuned into specific radio shows, became a cassette tape fanatic making mixes from the radio. You had to be very efficient with the record button, listen for those first few notes when your jam came on. My sister and our buddies made radio show tapes, with our own music, commercials and talk shows . My friend would do the beats on a cookie tin with a couple ball point pens and we’d sing and strum my mother’s Glockenspiel. We filled at least four 60 minute cassettes. Those recordings would be instant sample classics if they ever resurfaced. We still talk about those tapes.

I’d call into my favorite stations and get to know the DJ’s, request songs or compliment the show. I still do that! Still go for the ticket giveaways.

I was speed dialing before there was speed dial to the WNVZ104 hotline in Norfolk,VA trying to be caller number 4 to win Michael Jackson tickets. That was during the Thriller Tour. The concert was in DC and my sparkle glove was ready to rumble and I was caller number 3… Twice!

Im still mad about that. I settled for Oingo Boingo. Won tickets on 106.9 the Fox, our classic rock station.

Spencer and I met, hit the road out of college and moved to California where we discovered the true art of college and public radio: KPFK 90.7 Pacifica Radio, KZSC in Santa Cruz, KPFA 94.1 and KALX 90.7FM in Berkeley.

We tuned into Berkeley Free [pirate] Radio when it was broadcasting from a house off Telegraph Ave.

In Los Angeles I was a huge fan of KXLU 88.9 and attended shows with friends at Loyola Marymount. Sometimes we could catch the signal of KISL Radio Avalon on Catalina Island, which instantly whisked you away to paradise. We started talking about transmitters and doing a pirate FM station from our perch in the Santa Monica Mountains where we rented a Bambi Airstream and a series of covered decks, solar powered with plumbing from houses long gone in slow landslides. So we ordered a transmitter from a guy in Slovenia and started KCUF in our outdoor living room. We’d broadcast for a few hours, call people we knew on the peaks and ask them to tune in. They would call people they knew and like domino we would have a listening audience. Neighbors would come up and we would conduct interviews and play live songs, just turn it on and stream consciousness…all very fun. And dangerous, of course.

What is the appeal of having a radio show? How does it fit into the rest of your lives?

Its become a creative outlet for a square peg. It’s hard to focus with a child but he totally participates and the show is a nice record of our short time here on earth together.Borrowing from a lot of different artists and videos to broadcast this collective mood piece every week.

I’m happy this station exists. Madrid is so close and KMRD gives you this nice chair to sit and spit out some airspace for a mystery public. I like that we share our bandwidth with a religious relay station just over the Ortiz mountains – on the pass you hear an eerie mixture of both.

What are your hopes for the show?

We’d like to get more collaborative. We have some ideas. Maybe some weird recipe swaps, a kid’s song collective, couch surf report, ballpark radio, prison voices, mad money talk, spawn some activism, bring in some livestock and exotic animals. Try and get the station phone ringing. Bring some regular communal voices to the table and have some fun with it.

More wattage. It’s a short drive out of the KMRD sound radius which is too bad because the station is superior. What’s sadder is that you don’t hear it much in the local business speakers either, like its not conducive to sales. Madrid is a place where people do whatever the hell they want so why not tune your customers into the local lore? There are so many great shows on this station and they only stand to get better when people listen.

Radio is dying on many levels, but I think there’s still a true taste for this endearing medium that remains unique because it is the absolute resonance of a time and place. Like the thing you talk about and keep recordings of years and years from now even after everyone is gone. The personal music collection and Pandora algorithms will never continue to inspire the way radio always had in one way or another.