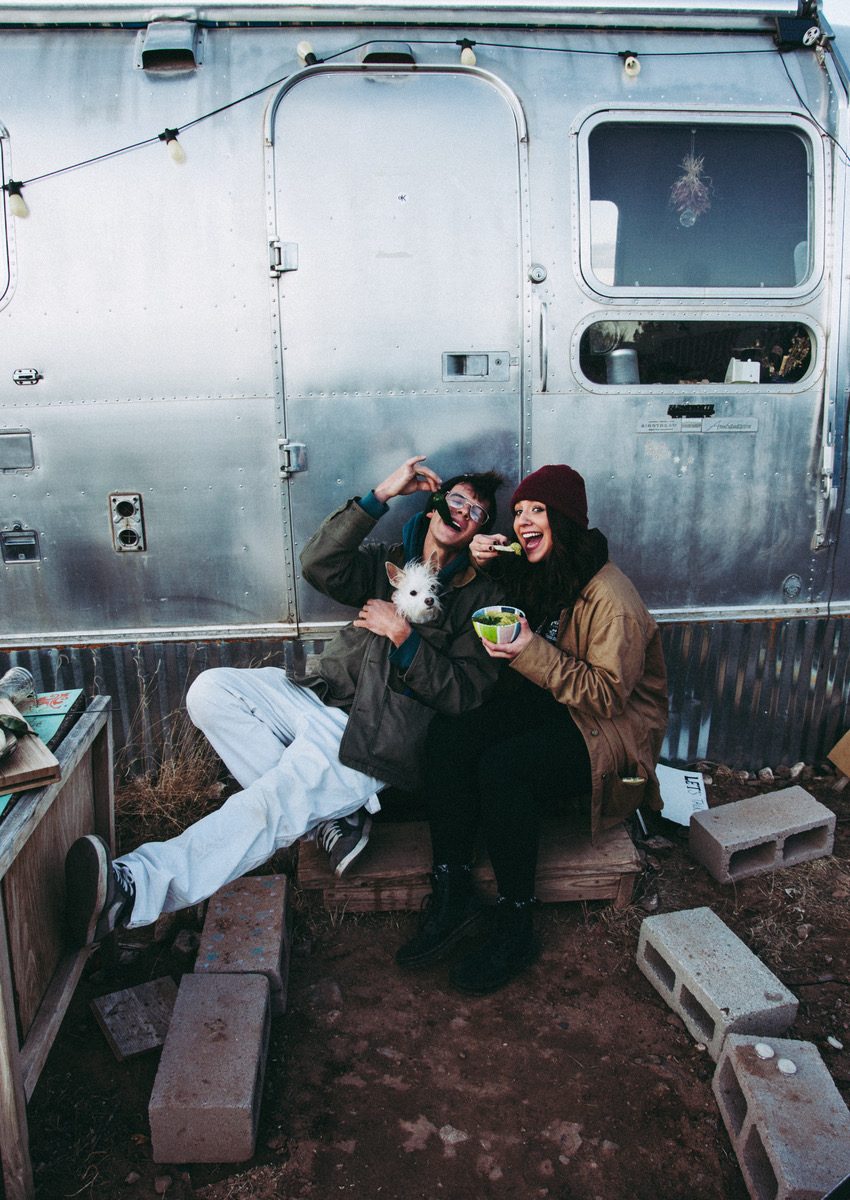 What are your names? DJ names?

Kate: Kate, and no DJ name. I’m pretty silent on the air, so I’m anonymous

K: It’s either one of us does most of the show, or throughout the week we’ll both put shit into the playlist, and then arrange it so it’s compatible.

A: It’s interesting to kind of present someone else’s music, because sometimes she’ll do the playlist for the week… I guess especially with working and stuff, and not necessarily always getting the lowdown on the other’s life every week, kind of getting a read on the person’s week through song selection.

K: What they’ve been listening to, what’s been stuck in their head all week.

K: The big sign when we were driving in [to Madrid], “KMRD on 96.9.” I think it was Ken Wolverton’s sign on Highway 14 when we first drove in, and so we turned it on. When we first drove from Santa Fe to Madrid. It was kind of like one of the first things that we saw about the town, before we ever came here. It kind of piqued our interest; it kind of gives you a little hint of what’s in store, you know.

A: I think I had watched “Down By Law” recently, and I really liked Tom Waits’s DJ impression, so I think I pretty much wanted to be able to do that.

K: I think it’s a good excuse to put music together every week, and I’ve totally learned about and found more music in the last year and a half than I would have if we didn’t have the show. Because it kind of keeps you diligent about that, otherwise you’re just playing the same shit that you’ve had on iTunes for five years. I like that.

A: I think when we started, the appeal was heat and outlets.

K: We were in a primitive living situation at the time.

A: But I think that as it’s developed –

K: – And the records. We spent a lot of time in [the music library].

A: – But as it’s developed, it’s been nice to have one constant throughout the week, to have an anchor, like throughout life shifts and stuff.

A: I like finding a vehicle for finding new music, like making decisions based on a story that you kind of weave together, that only you can decipher, or you and a few other people. A song story.

K: I think it’s made me more comfortable being a DJ in other aspects of life, like at work, playing music for most of the day. Or when we’re driving in the car, having an idea of what you want to play and what would fit the setting – I feel like you’re thinking about that kind of stuff more.

A: And then getting feedback from them is weird – you’re just projecting something out and then it kind of bounces back eventually.

K: To get the hummus business off the ground.

A: To get famous or die.